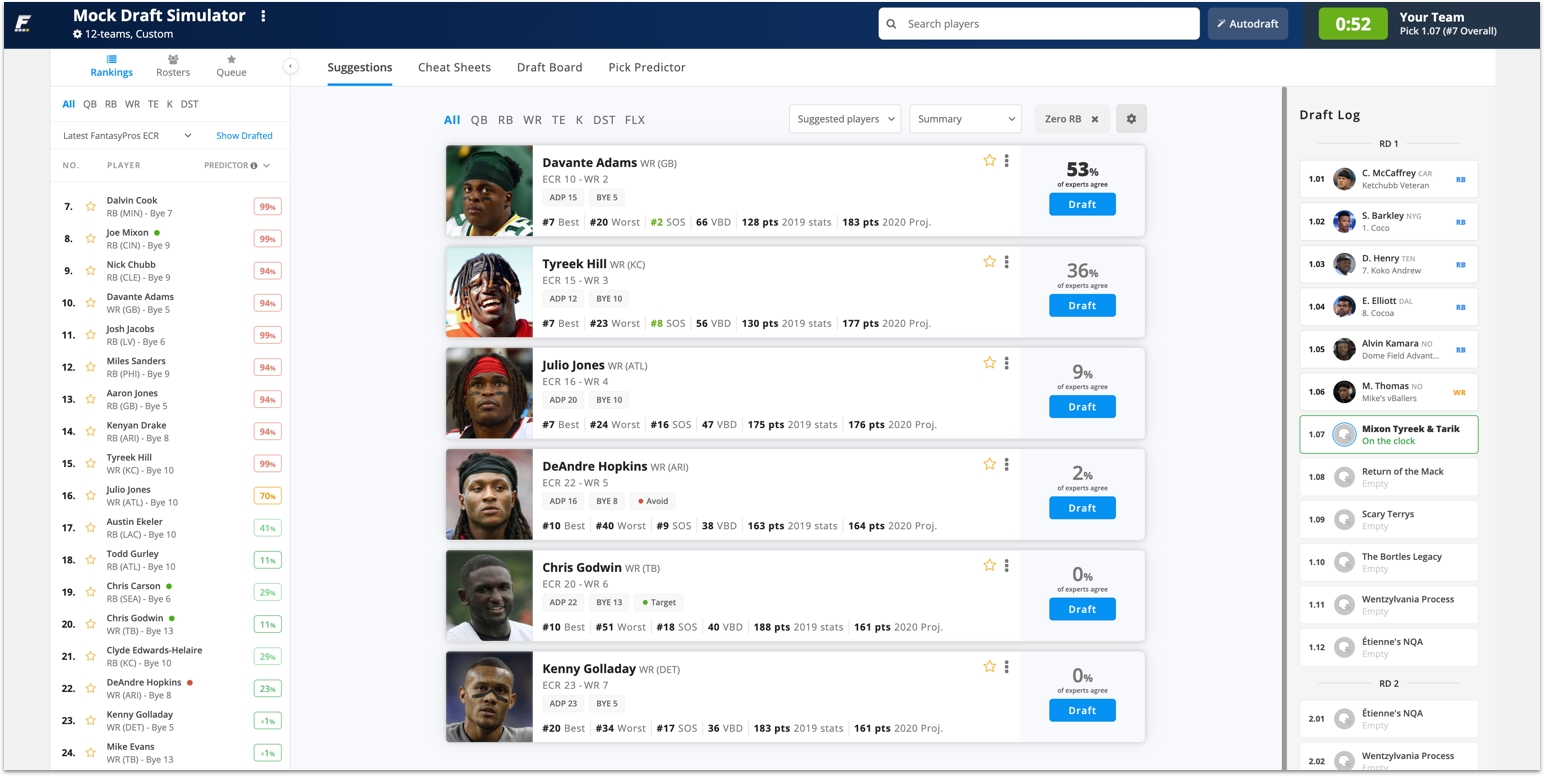 As the NFL gears up for a season without a pre-season (speculation on late round flyers will now be even more interesting), we at FantasyPros have been gearing up for fantasy football draft season.

This means our ever popular Draft Wizard has received a ton of updates over the last few weeks to help you better prepare for your real fantasy draft. The updates for Draft Wizard on the web (we'll talk more about our mobile apps in another post) address a variety of really popular requests from you, our user base, over the years.

To go along with our recent overhaul of the core Draft Wizard mock draft simulation experience (seriously, have you checked it out yet?), which included a modern user interface, the ability to choose how many players are suggested when it's your turn to draft, a draft simulation clock timer (for those masochistic types), and auction simulator fast mode, we now have rolled out for you:

This one has been a long time in the works. For those newer to the game, here's a quick summary.  For more advanced/experienced fantasy football managers, these draft strategies are pretty common, but we'll break down the details of how they're implemented in Draft Wizard:

Draft strategies can be accessed by clicking the gear icon in the upper righthand corner of the Player Suggestions area. This also allows you to specify the number of suggested players you are shown each round.

We're really excited about this feature and hope this lets you test out a variety of draft strategies before the Real Deal.

This is a premium feature available to our MVP and HOF users.

Customize Your Opponents: Tweak the Simulator to be closer to your actual league

This is another feature that we've been working on for quite some time. In the standard Mock Draft Simulator, the opponents you are drafting against are a randomized mix of experts and ADP (average draft position) values, run through a little black box to make it more realistic. However, for those of you that run a lot of mock drafts, it's almost as if your opponents can be too good.

While I'm not trying to denigrate the quality of your league's competition (unless you're in one of those 6 team leagues and like to ask others to rate your roster online...) we all know that your leaguemates have specific tendencies and are not always "draft the best available player for this position" drafters.

Maybe one really loves to go Zero RB (see above). You know another manager always picks the best player available based on Yahoo's rankings. Another manager is a huge Green Bay Packers homer and will draft all Packers players whenever it isn't a huge reach (and sometimes even then). Maybe your whole league values quarterbacks over other players.

Either way, we now have you covered.

You can access these settings after you've synced your league. Then, from the league settings view, click "Edit" under Mock Drafts.

This feature is currently available for our Premium subscribers.

Instant Pick Reactions: Get feedback on your way to draft domination

And just to add a bit of fun (and feedback, of course) to your mock draft simulations, we now display instant pick reactions for any draft pick reach or steal. Were you able to get Lamar Jackson in the 5th round? Amazing! You deserve kudos.

Did you draft a kicker in the 7th? Well... OK. But we're going to let you know what we think about it.

This will also give you the immediate opportunity to Undo that pick, if you so desire.

Looking forward to the season

I think all of you, like the rest of us, are looking forward to NFL kickoff with extreme anticipation. As always, our team is working hard during the off-season to get you the best experience possible to dominate during your draft and all season long.

Now, with Draft Wizard draft strategies, opponent customization, and instant pick reactions, we hope you'll be better prepared than ever for your real drafts.

Give the new Draft Wizard features a spin now.

Pick the over or under for 10 fantasy stars each week and compete for free prizes! Sponsored by BetMGM.

Walk into your drafts prepared with a cheat sheet designed to guide you through each pick and make your draft night stress-free.