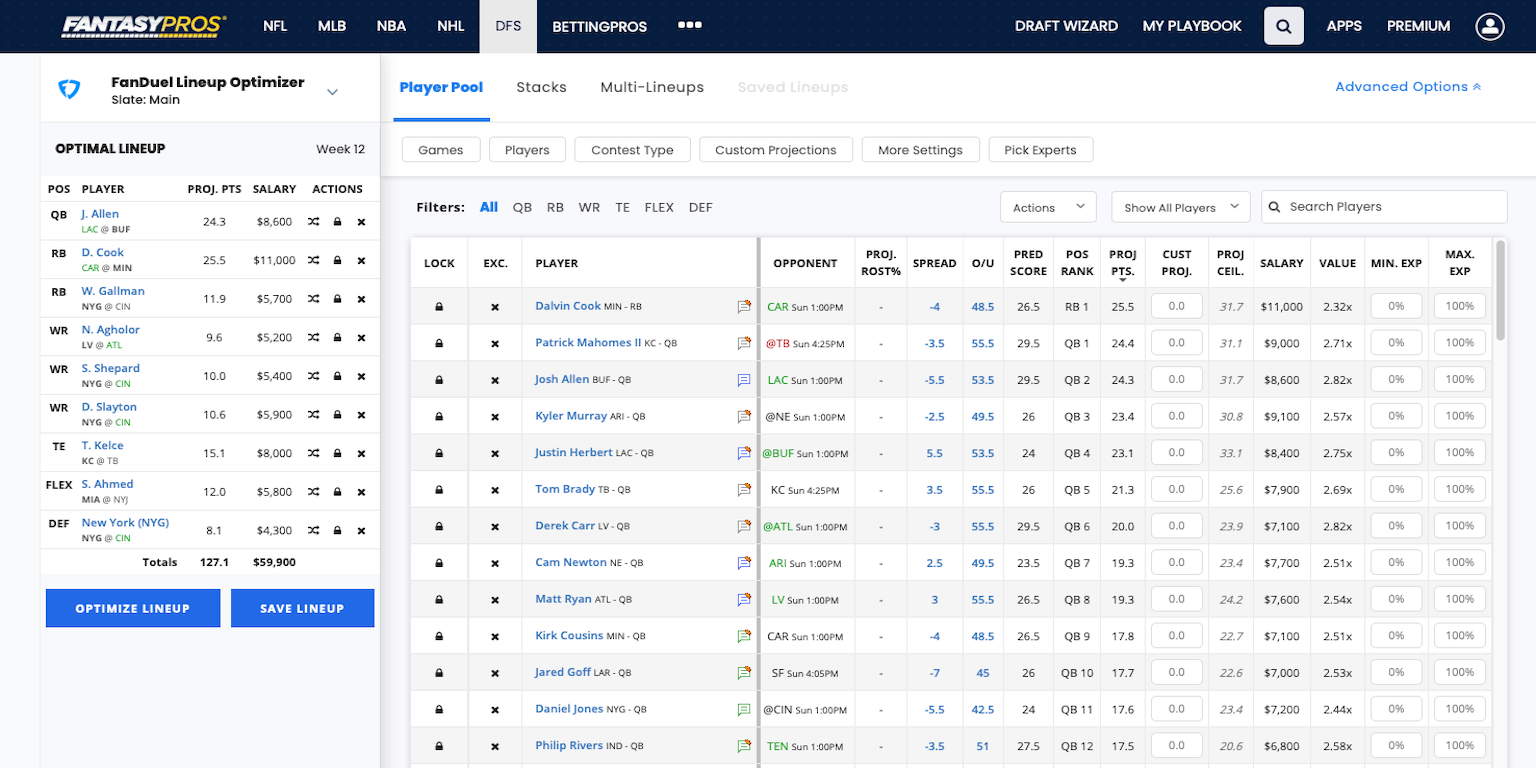 For NFL DFS, most contests follow a salary cap format, where each player has an assigned salary and your lineup must not exceed the salary cap. The salary cap, roster settings, and player prices vary on which DFS site and slate you choose.

If you’re new to DFS, or are looking to get better results in your DFS contests, our DFS Lineup Optimizer will help you leverage our expert projections to generate winning DFS Lineups! We’ll break down the essentials of the Lineup Optimizer, and how to use it to find the most optimal lineup for the contest you are entering.

Next, we recommend choosing the contest type by clicking the Contest Type button. There are two contest types: Cash contests and Guaranteed Prize Pool contests (also known as GPP or tournament contests).

By default, the Lineup Optimizer is tuned for cash contests, which is when around 50% of the contest participants win the same prize amount. You will win a prize if your lineup scores in the top 50% of the entries. For cash contests, because you do not need the best lineup to finish in the top 50%, it is better to pick players who are more consistent and are less risky.

In GPP or tournament contests, a smaller percentage of contest participants win (about 15% or fewer), and the top scoring lineups in the contest will win a larger percentage of the prize.

For GPP contests, it is better to pick high upside players who give you the potential to finish with a winning lineup and give you the best chance of hitting the highest score for the week. Our Lineup Optimizer takes this into account if you switch the Contest Type to GPP. When GPP is selected, the Optimizer uses our ceiling projections, which increase the projections of players who have a higher potential to produce a big game.

Customizing Your Player Pool
After selecting the slate and the contest type, you can move to the player pool and start to lock any players that you would like to see in your lineup. If there are any players that you do not want in your optimized lineup, you can click the X next to a player in the Exclude column to customize your player pool further. In the example below, I’ve locked Gus Edwards into my lineup, and excluded James Conner from the player pool.

A couple of key metrics that you should pay attention to when locking and excluding players from your optimal lineups are the Player Value, Predicted Score, and Spread.

The Player Value shows a measure of the player’s projected points compared to their salary. Players with high value will give you more points per dollar, which will help you create a more optimal lineup and give you a better chance to win. Players with a low value are not projected to be worth their price. The Player Value is also taken into account when we generate your optimal lineup.

For example, Deshaun Watson and the Texans are facing the Lions on Thursday, and the Texans are projected to score 27 points. The Over/Under for the game is 51.5. Both metrics are favorable, and suggest that Watson has a good chance of scoring a higher amount of fantasy points. Additional metrics can be found in our DFS Cheat Sheets.

Generate Your Optimal Lineup
After configuring your player pool settings, click the Optimize Lineup button and we’ll automatically generate the most optimal lineup in the contest. It's that easy! You can also modify the optimized lineup by re-configuring your locked and excluded players in the player pool to experiment with different lineups.

We hope this breakdown helps! Next week, we’ll dive deeper and give you tips on how to use our multi-lineup and stacks tools in the Lineup Optimizer.

Go back in time and see if you can draft the highest scoring team in 2020. Compare your scores with the FantasyPros community and compete for the top spot in the Perfect Draft Leaderboard.

My Primer lets you view a personalized version of Mike Tagliere’s ‘The Primer’ article, just for your team.